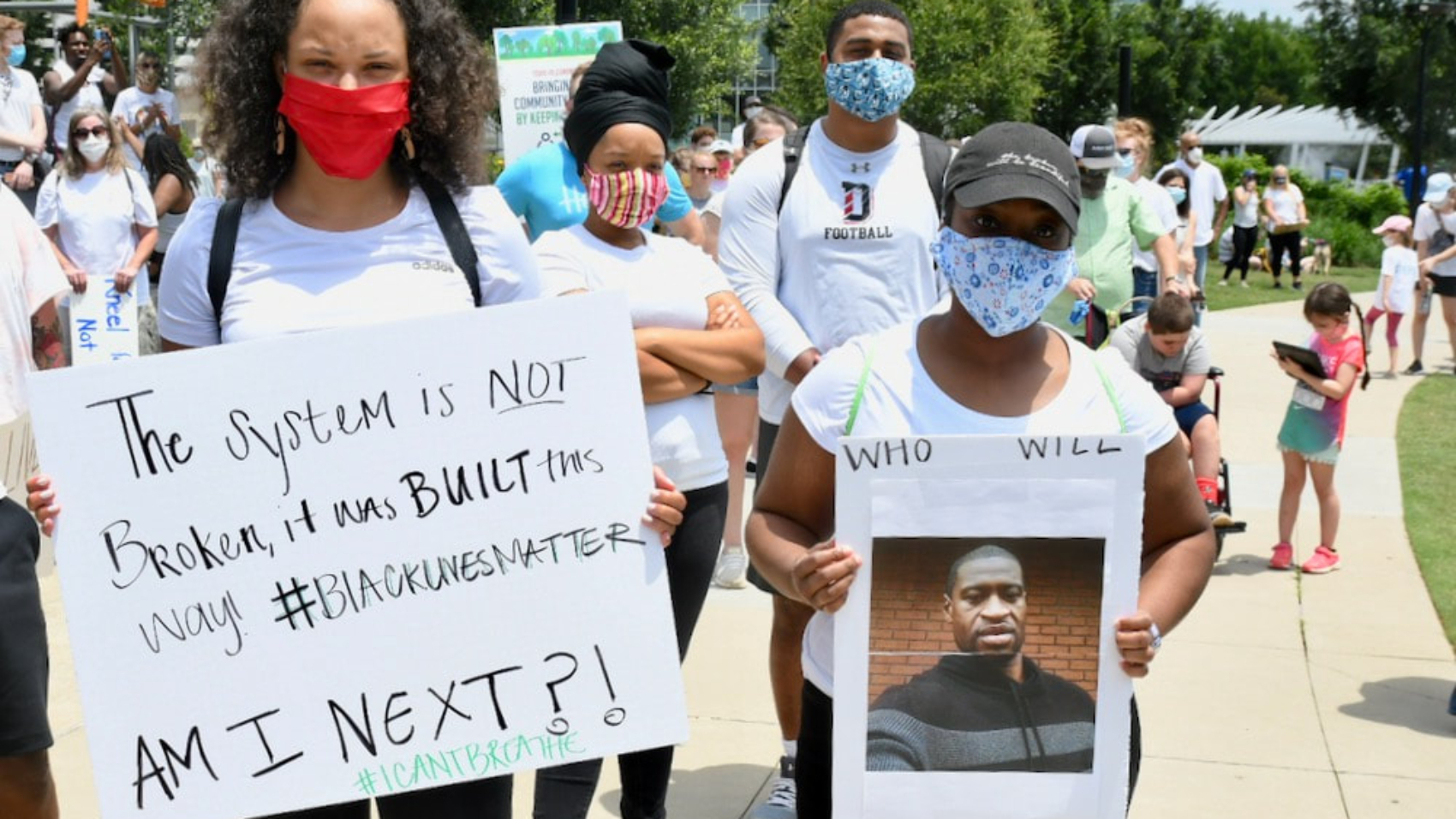 As the push for social and economic justice continues to play out in the streets of major American cities, Mecklenburg County’s elected leaders voted unanimously Tuesday to declare racism a “public health crisis” — one that should be met with urgency and funding.

The nine-member Board of County Commissioners — all Democrats — did not lay out a specific plan for eliminating racism but instead stressed its detrimental impact on communities of color.

“We certainly know that racism is a driving force of the social determinants of health and a barrier to health equity,” Commissioner Mark Jerrell of District 4 said in a statement before reading the proclamation.

The proclamation, he said, was meant to acknowledge that racism “goes beyond the action of an individual” to include systems that create “disproportionate outcomes for people of color.”

Mecklenburg joined a growing list of U.S. cities that have adopted similar measures following the social unrest that was sparked by the police killing of George Floyd by a Minneapolis police officer.

QCity Metro thanks its sponsors. Become One.
Near the start of Tuesday’s meeting, Chairman George Dunlap instructed the country clerk to pause the virtual session for eight minutes and forty-six seconds — the exact time that elapsed while the Minneapolis officer pressed his knee into the neck of Boyd, who died of asphyxiation.

“I confess that I have been having difficulty dealing with the fact that, for eight minutes and forty-six seconds, a police officer had his knee in George Floyd’s neck as people watched,” Dunlap said before he called for the period of silence. “There were children who watched, and a lot of people are really devastated. Some of us can even imagine what that feels like…”

The proclamation states that racism “unfairly disadvantages black and brown individuals and communities while unfairly giving advantages to other individuals and communities.” This system of racial discrimination, the proclamation says, has “perpetuated poverty through intention and unintentional policies that create barriers to economic mobility.”

The proclamation states that 73% of the county’s homicide victims are Black, and Black residents suffer disproportionate rates of chronic diseases, including high blood pressure, heart disease, diabetes, and accelerated aging — all of which made the Covid-19 pandemic more deadly in Black and Brown communities.

“For generations communities of color have faced vast disparities in job opportunities, income and inherited family wealth,” the proclamation states, adding that systemic racism “undermines physical and mental well being” of its victims.

In setting budget priorities, the commissioners for the past two years have instructed County Manager Dena Diorio to set aside tax dollar to address racial disparities, especially in the areas of affordable housing, mental health support, parks and greenways, and early childhood education. 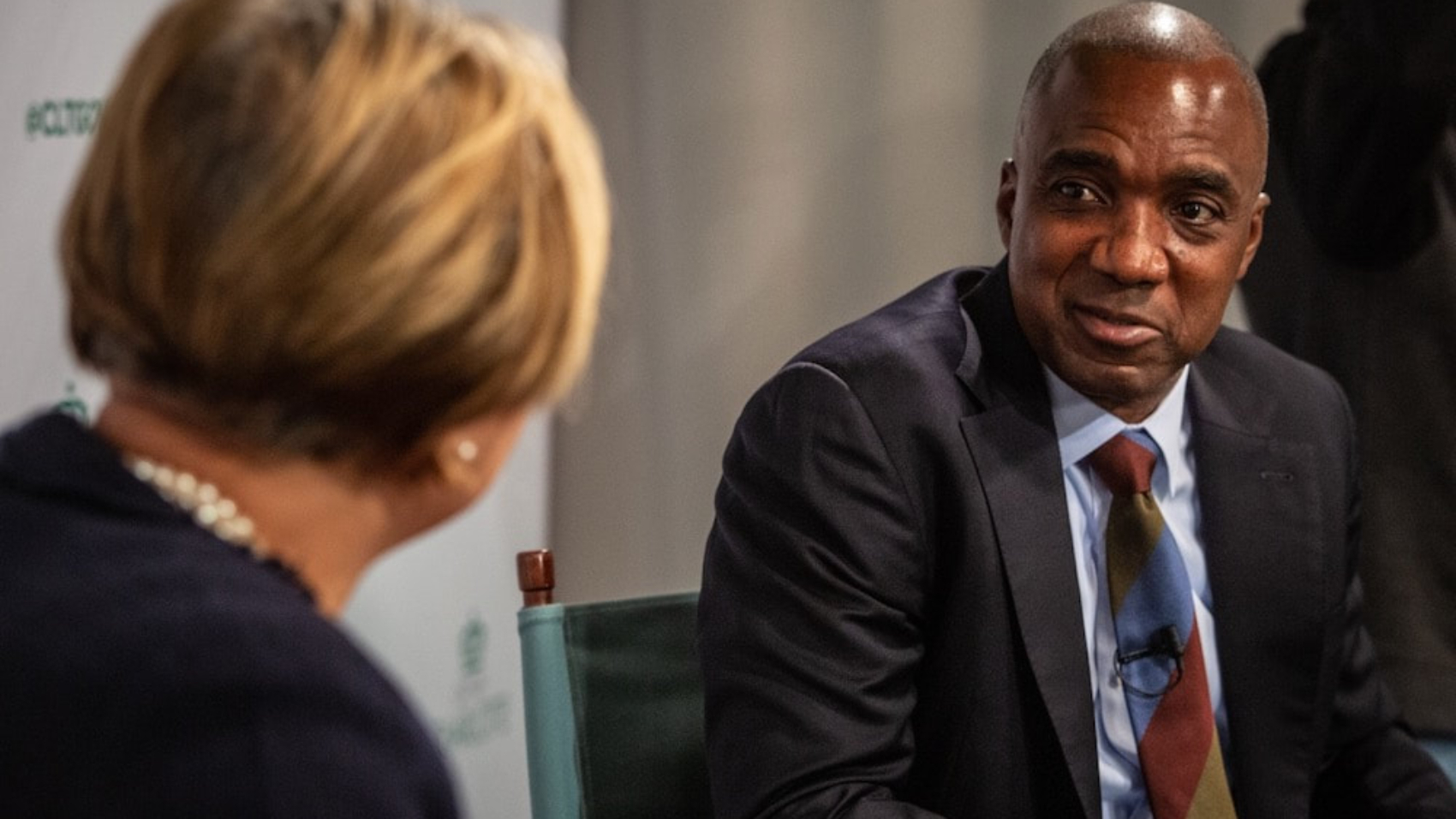 Chime Solutions, a Black-owned business based near Atlanta, is bringing 250 jobs to Charlotte, part of a city initiative to grow the local economy.

The company will hire life and health insurance agents earning wages of $16 an hour with potential for bonuses, according to the company.

Chime made the announcement Tuesday, along with Charlotte Mayor Vi Lyles and city council member James Mitchell, who heads the city’s workforce and business development committee. They were joined by Urban League of Central Carolinas CEO Teddy McDaniel.

In exchange for bringing the jobs to Charlotte, Chime will receive funding under a new economic development program approved by city council in February. The program, which provides “opportunity hiring grants,” provides $2,500 per hire, up to 50 employees, to help attract new companies and encourage existing ones to expand.

To qualify for the incentives, Chime must recruit full-time workers from any of several local workforce development organizations, such as the Urban League of Central Carolinas, Goodwill Industries of the Southern Piedmont, Charlotte Works, Charlotte Area Fund and others.

A timely announcement
QCity Metro thanks its sponsors. Become One.
The announcement comes as Charlotte-Mecklenburg struggles to overcome the economic pain of the Covid-19 pandemic, which led to mass layoffs and businesses closing, not just in Charlotte but worldwide.

According to state figures, more than 1 million North Carolina residents have filed unemployment claims since the pandemic began. In the Charlotte metro area, the jobless rate is estimated at nearly 13%. Especially hard hit have been the city’s tourism and hospitality industries.

Lyles said she hopes the new jobs created by Chime can provide new opportunities for workers in the city who face employment challenges.

“Our goal is to model the ability for people to move upward,” she said, noting that Charlotte continues to struggle with economic mobility issues for some of its residents.

‘Overlooked talent’
The announcement also comes as Black residents are protesting by the thousands in large cities nationwide, demanding an end to police brutality and the economic and social systems that deprive Black Americans of equal opportunity.

Chime’s founder, president and CEO, Mark Wilson, has said that his company is especially focused on providing economic opportunity in America’s poor communities.

At Tuesday’s press conference, he noted the “troubling times of late” and decried the “overlooked talent” in America.

“We’re trying to do our part as a company by virtue of expansions like this to Charlotte to dispel a lot of the old legacy myths that surround people of color and their talent,” he said. “We’re actually disproving that we somehow are less talented.”

Free training
Wilson said the Charlotte jobs will allow employees to work from home, answering calls from retirees seeking information about the life and health insurance benefits provided by their former employer.

Job candidates will receive eight weeks of training through Central Piedmont Community College to prepare for the exam needed to become a licensed insurance agent. The training will be paid for under a state program designed to spur economic development. Chime will cover the cost of taking the exam.

McDaniel, who heads the local Urban League, called the jobs a stepping stone to opportunity.

“It’s about wages and the fact that they are gaining a credential,” he told reporters. “This is a license that they can take [with them], so that’s very important to our underserved communities.”

About Chime
Wilson founded Chime in 2015 with his wife, Shelly Wilson, who is the company’s chief operating officer. Headquartered in Marrow, Georgia, about 10 miles south of downtown Atlanta, the company now operates call centers in several cities, including a 75,000-square-foot facility in Charlotte’s University area.

The company opened its first operations in Charlotte last fall, promising to create 1,000 jobs by the end of 2020. Wilson told QCity Metro at the time that those jobs would offer a starting wage of at least $14 an hour after training, a pay rate he said is above the industry average. 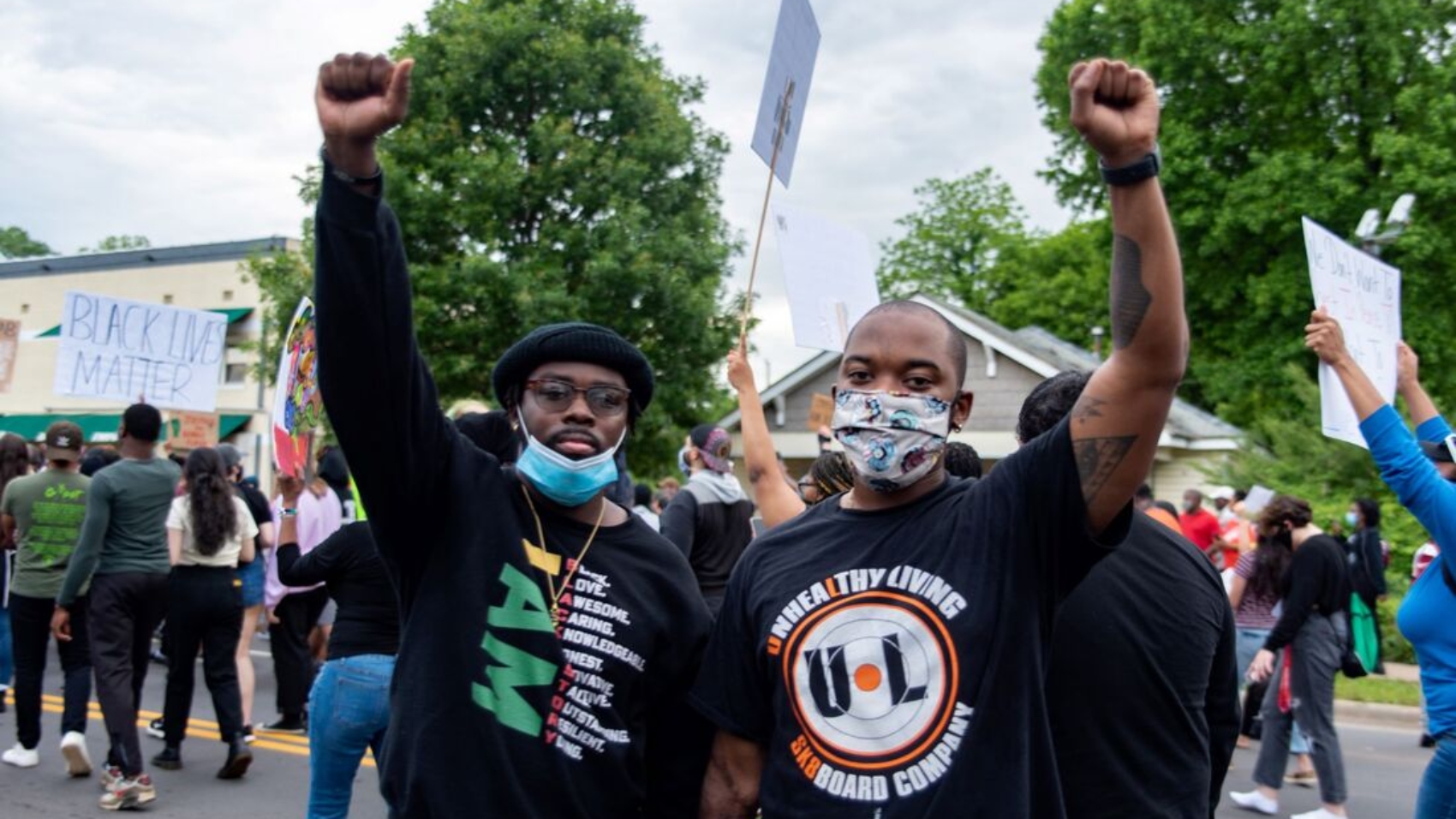 County commissioner calls on community leaders and elected officials to push for policy changes based on protesters’ demands.

“I really felt the need to bring as many Black men in leadership together to denounce racism, show our support for social change and ensure that we use our collective power to make the changes that people are advocating for,” said Jerrell, District 4 county commissioner.

Emanuel Nine: June 17 also marks the fifth anniversary of the shooting at Emanuel AME Church in Charleston that killed nine Black parishioners. Among the victims was Graham’s sister, Cynthia Hurd. Graham will be the keynote speaker at Wednesday’s event.

“Despite the Covid-19 pandemic, an international crisis, it’s important to remind the world of what happened five years ago because racism continues to be a crisis in America and in countries around the globe,” Graham said in a statement.

QCity Metro thanks its sponsors. Become One.
Jerrell is encouraged by protesters who have pushed for justice for Black lives, saying it’s up to elected officials “to make sure that the policy is there to meet the demands of the people.” He noted the vote by the city council to pull funding from the 2020-21 budget earmarked for Charlotte-Mecklenburg Police Department purchases of chemical agents. Jerrell added that county commissioners will declare racism as a public health crisis during the June 16 board of county commissioners meeting. 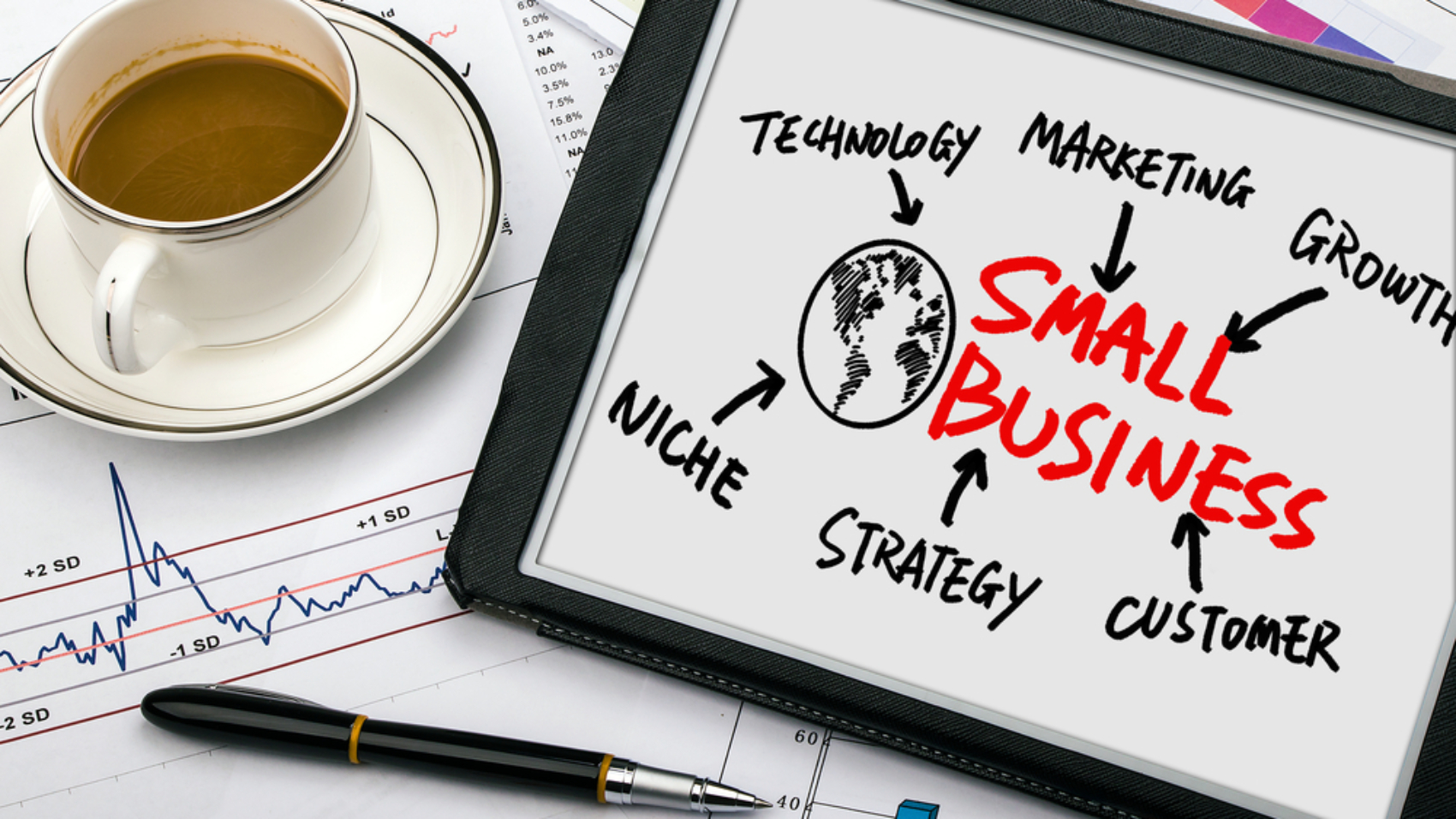 Minority-, women-, and veteran-owned businesses will be shown priority for grants up to $40,000.

A new Covid-19 grant program aims to bolster the long-term viability of small businesses in Charlotte’s Center, City and it puts a priority on businesses owned by minorities, women, and veterans.

On Wednesday, Honeywell and Charlotte Center City Partners launched the Center City Small Business Innovation Fund to help small businesses in and around Uptown innovate and adapt to the new economic realities caused by the pandemic and economic downturn.

The fund, with an initial investment of $2 million by Honeywell and in partnership with the Foundation For The Carolinas, will provide grants of up to $40,000. Priority will be shown to minority-, women-, and veteran-owned businesses, the sponsors said in a news release.

“During this crisis, we’ve seen our community step up in tremendous ways to support our neighbors and nonprofits through such efforts as the Covid-19 Response Fund,” Michael Marsicano, president and CEO of Foundation For The Carolinas, said in a news release. “Now we have an opportunity to support Center City’s small business community as they pivot to adapt to changing times.”

Shanté Williams, chair of the Charlotte-Mecklenburg Black Chamber of Commerce, said most Covid-19 funding has been focused on emergency relief; few programs have been focused on what happens after the emergency. As businesses re-set, “we have an opportunity to build the future right now and that’s what this fund is geared toward,” said Williams, who also runs a venture capital firm.

Williams said her organization will encourage and help its member businesses — and any who seek their help — to apply. “We have to seize this opportunity to participate,” she said. “We want to be stronger on the other side of this (crisis).”

The Center City Small Business Innovation Fund opens for applications on June 26. Applicants will be notified of their status by Aug. 1.

Eligibility for grants
Must have an existing physical location or is expanding business in Uptown, South End, Midtown, Historic West End, or within the 2-mile radius of the Trade and Tryon streets intersection.
Headquarters must be located within Charlotte.
The business had 50 or fewer employees (full and part-time) as of March 1.
The business experienced adverse impacts due to the Covid-19 pandemic.
The business is willing to participate in interviews and share lessons learned.
Businesses that received funds from other Covid-19 programs are still eligible for this fund. Click here for an FAQ about the innovation fund.